Well,well,well… Ubuntu 11.10 is here as promised. Check out what Andrei has to say about the new release in “Ubuntu 11.10 Oneiric Ocelot Released [Screenshots & Video] “. A round of applause to Andrei on being on top of the updates and his various contributions through this PPAs.

I basically wanted to bring to the forefront what Canonical is pushing as part of its Ubuntu story and my thoughts on it.

First off, this is what Canonical have put in their homepage on Ubuntu 11.10, codename Oneiric Ocelot: 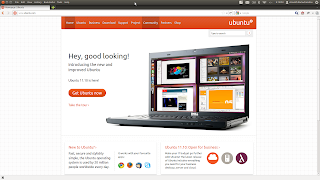 As you can see, it no more ‘use linux for hosting your server, do nerdy things, get a good little wink from the opposite sex coz you’re a LINUX USER’ alone. Its ‘Hey good looking’. Its an OS for your daily use and productivity too. All in good time! I think, what be said about Canonical’s philosophies on taking certain decisions which didn’t go well in the FOSS Linux world, they are championing the cause of bringing an affordable, alternative desktop to the lay man. Not to take the gloss of other distros like Linux Mint, Crunchbang (my all time favorite, Salute to Corenominal), plain old Debian (on which Ubuntu and others aforementioned are based on), Fedora etc., But I feel the future is going to be more linux desktops. Sure, there will the apprehension that people get when they face the fear-of-unknown factor, but over time, Linux will be right there with the Microsofts and Apples of the world when it comes to everyday desktop computing. I for one, am convinced (though, with a little bit of background in computing, Linux doesn’t look intimidating to me, I was still apprehensive because of the inherent problems that Linux is evolving to solve) and have moved to Linux (running both Crunchbang 9.04 through current AND Ubuntu 11.04 through 11.10) and really don’t miss Windows much (thanks to Codeweavers for bringing Wine to the table, I run the necessary evil of Outlook in both). So much so, I’ve moved on from having a Windows OS in my work laptop ‘just in case’.

Talking about me adopting Linux, I did it for couple of main reasons. One, I felt Windows/MAC was not affordable for me and second, I really like the concept of FOSS. Since the philosophy of FOSS, people coming to the Linux world from hither, not only don’t miss MOST applications from other OSes but also have a lot of options to choose from. Like, I’m writing this blog in my Tomboy Notes, and if I want to move to a sophisticated software, I may choose from Blogilo, Redbook, Gnome Blog, Libreoffice writer to mention a few. And I get it all for free. Peace.

On the choices that Linux (NIX in general) offers, I had an interesting debate with Nisar out in office. He likes Linux like a distant cousin who causes you the trouble of camping in your living room on weekends. He says I’ll use the OS which gets my work going. His take on linux is that its still not out there and has one too many option so people might be confused for adopting linux. Well, I had to differ on this. From the forums I lurk around, I find that linux is getting adopted more and more. And of course, the only forums I lurk around are developer/qa related in core information technology industry which might make my stand a biased one. But I’ll think wishfully 🙂